Most folks (us included) presumed painted Eichler fireplaces couldn’t be saved –Ivy and Kyle just proved us wrong. You might recall their fireplace dilemma –a familiar sight, with painted interior and preserved red-brick exterior, tantalizing you with what could be. Two-tone certainly looks wrong, but how to fix it? 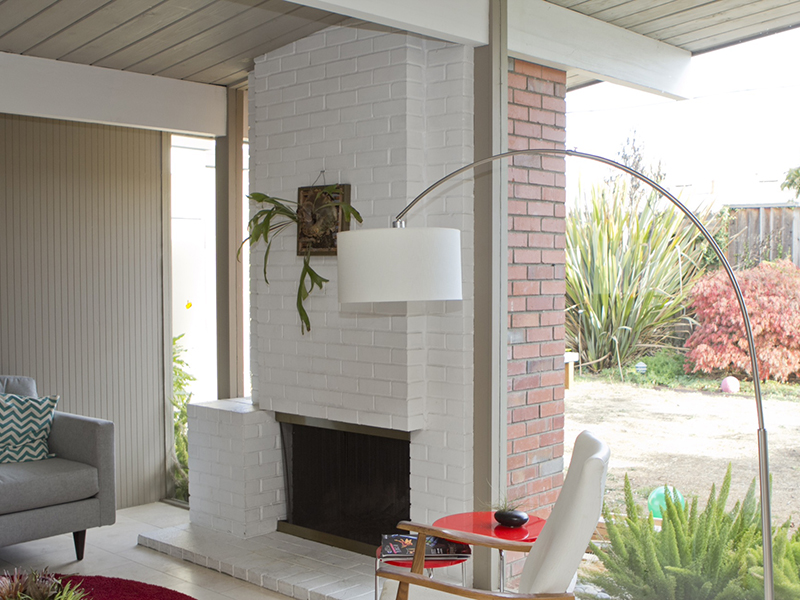 These DIY superstars bravely decided to strip-off the paint…and the results are spectacular. Ivy kindly shared their process, starting with some investigation. “I chose a brick on the side near the wall and scraped off some paint to see what we would be dealing with.” 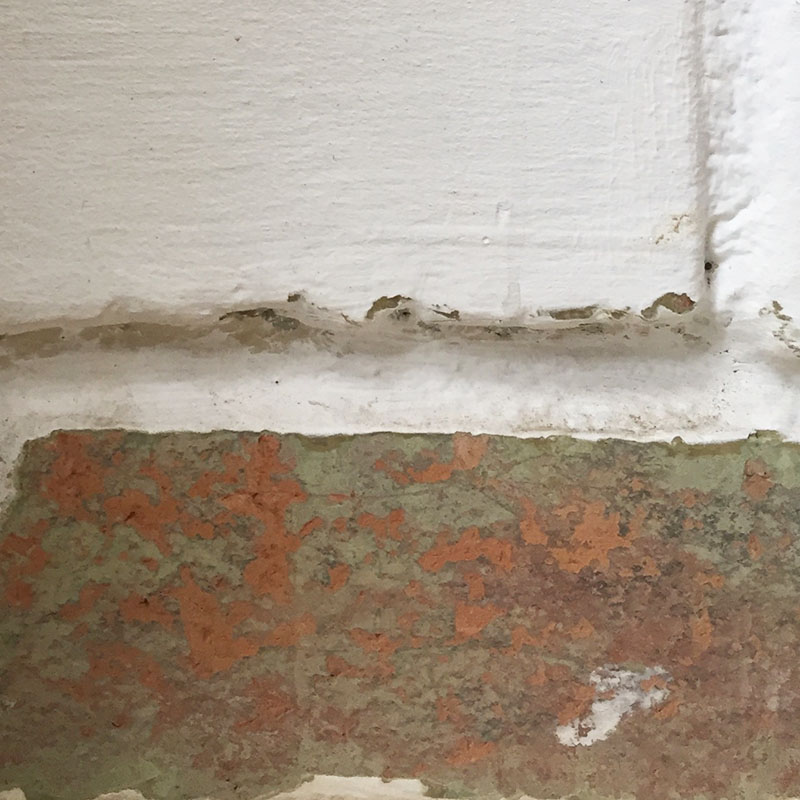 “It came off fairly easily and I learned there were four paint colors, so probably at least eight coats. There was a 60’s green, a 70’s avocado green, an 80’s beige, and the white we put on top when we first moved in.” 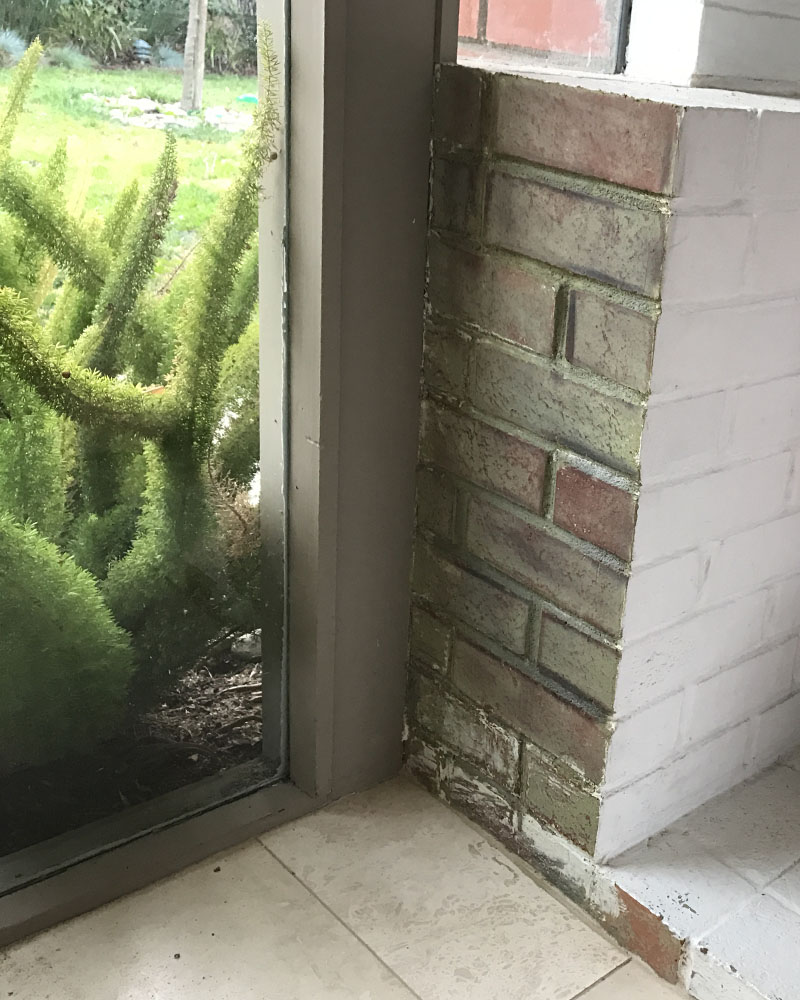 “I was so excited to see brick that we hand scraped off the paint on that side, then cleaned out the grout lines with a wire brush. It took a while, but we were so happy with the natural brick. How hard could it be to do the whole thing?” –from experience, the answer is always “harder than you think”. 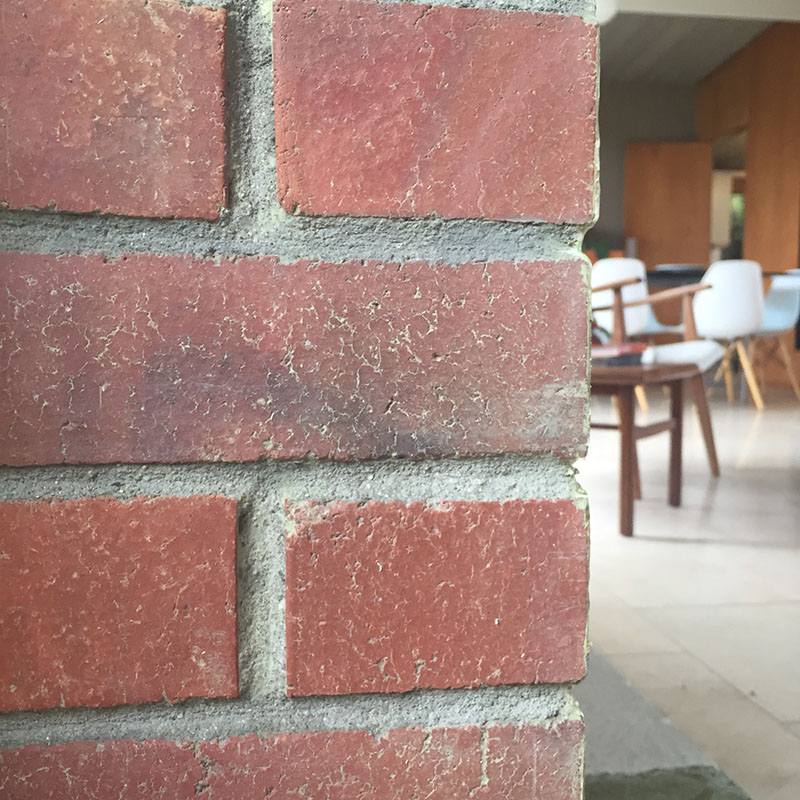 Ivy and Kyle first used Ready Strip –a product we are familiar with. In fact, this step reminds me of our paneling restoration process –you think you’re getting somewhere, only to realize there are many more layers of paint, and much more work, ahead. Frustrating, but strangely satisfying. 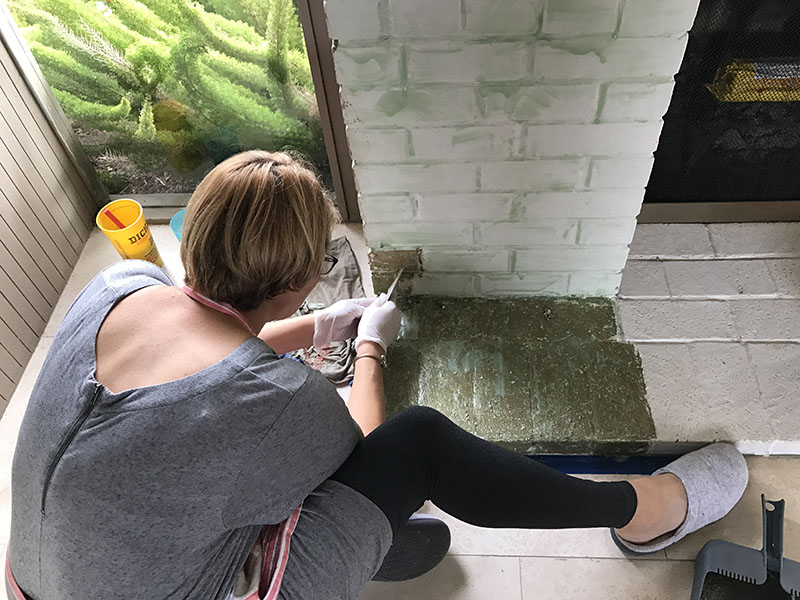 They also used Peel Away –a paint removal system which uses laminated paper on top of the stripper itself. “We coated the entire fireplace and let it dry over night. Then we scraped and scraped. Then we coated it again and repeated. It may have been two or three times that we did this to get it all off.” 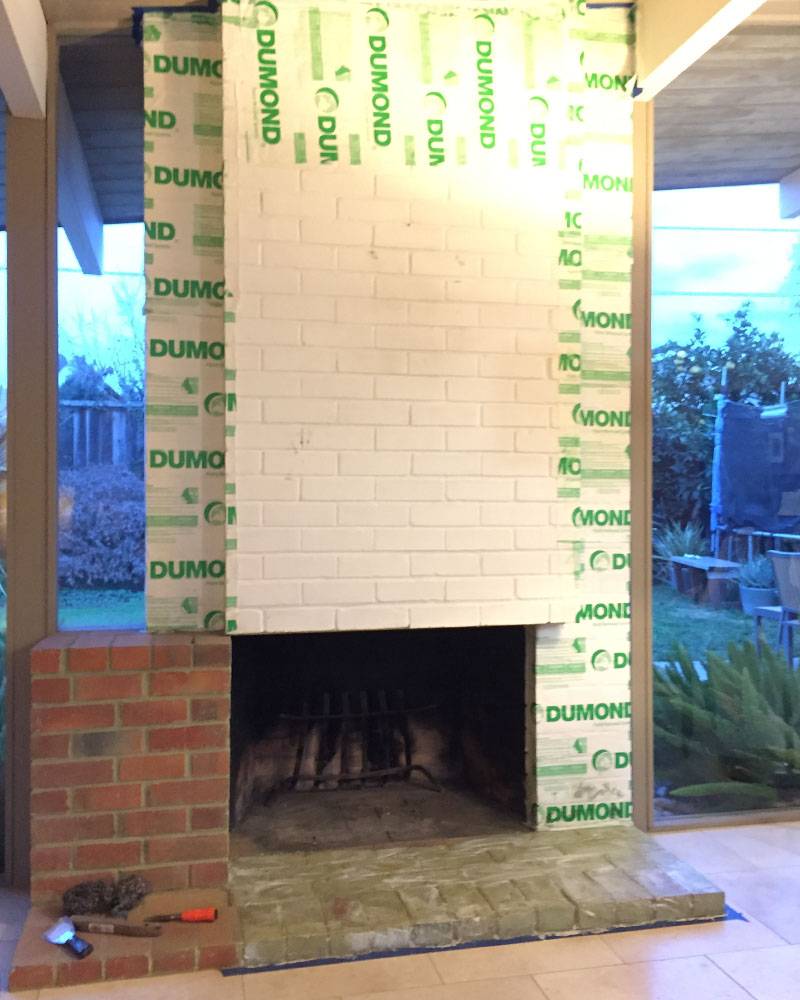 “The first time, it took off the white and beige and left us with a green fireplace.” 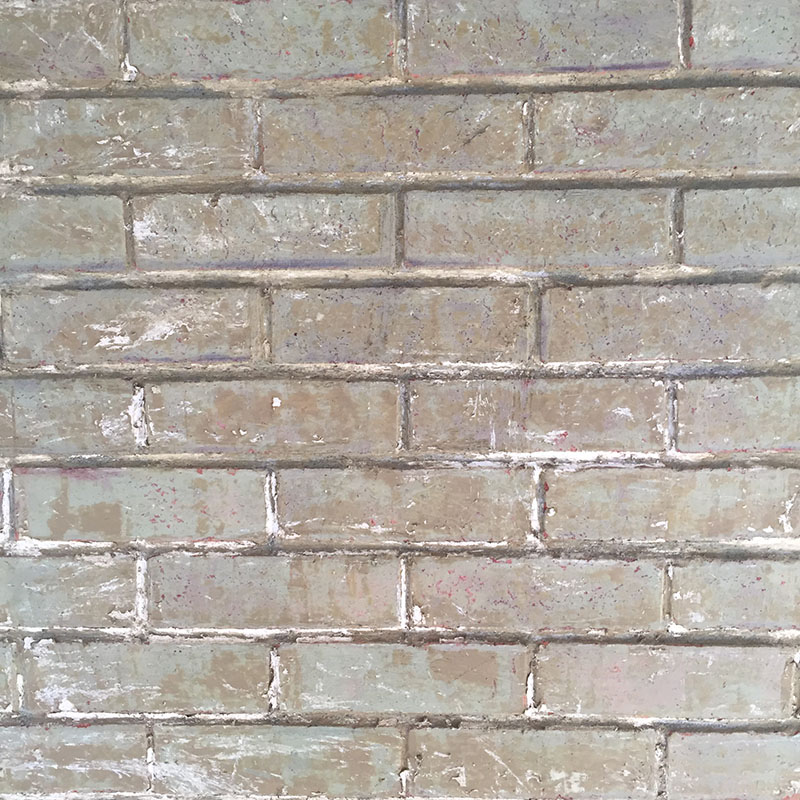 “The second or third time, it took off the paint and we were very excited! But we now we had to move on to the grout. The paint removers did a great job on the brick surface but not on the grout lines. When we cleaned the grout it dripped down and re-coated the face of the bricks! AAARRRGGGHHH!” 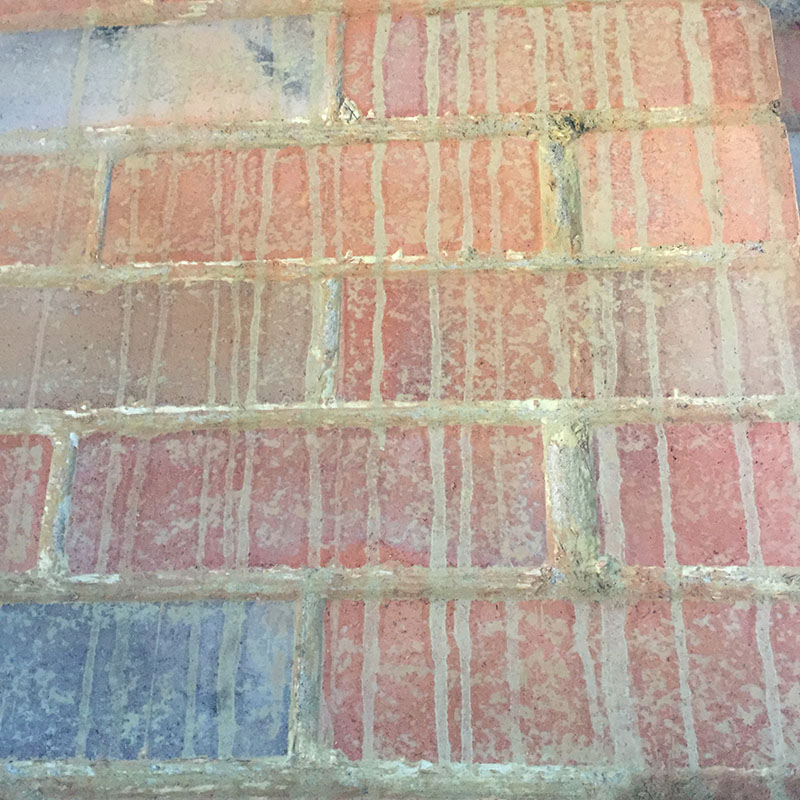 “The only thing working on the grout was lots of muscle. Lots of scraping with a small wire brush. The metal burnished the brick, making it dark, but with even more wiping and scrubbing the black marks came off. We used water, mixed with a small amount of paint remover, while we wire-brushed every grout line, being careful to wash the face of each brick as we went along”. Here’s an image we can relate to… 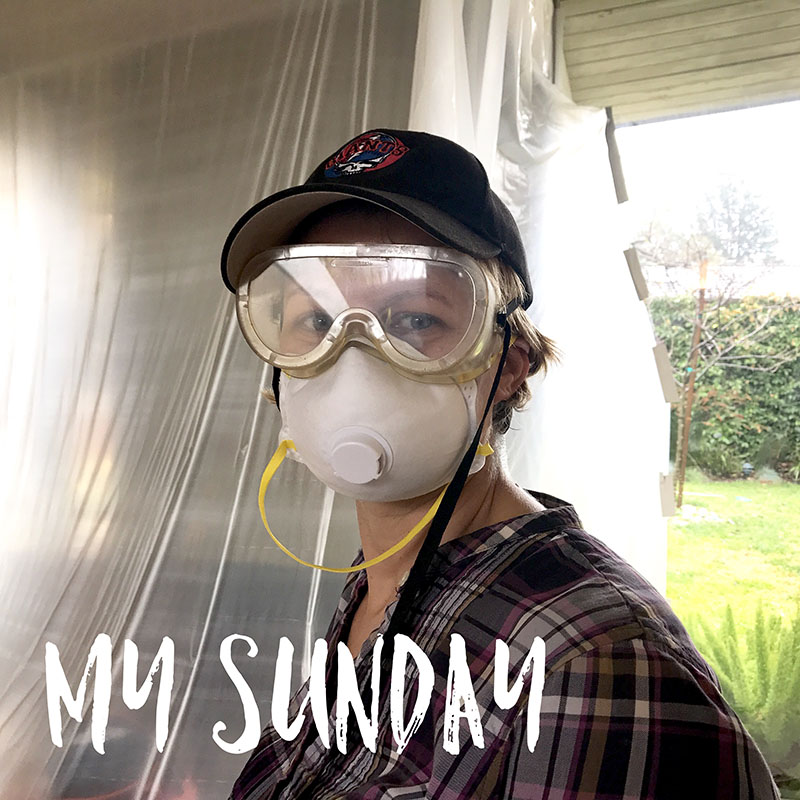 “This got old fast. So we tried wire brush attachments on the drill. That didn’t really work. We ended up using a small orbital sander, with 60-grit sandpaper. We tested it in an inconspicuous spot. It worked well at removing the paint, and a little of the brick with it. But it looked good. So we hung a bunch of plastic and went at it with the orbital sander. One person sanded, while the other followed with a shop vac.” 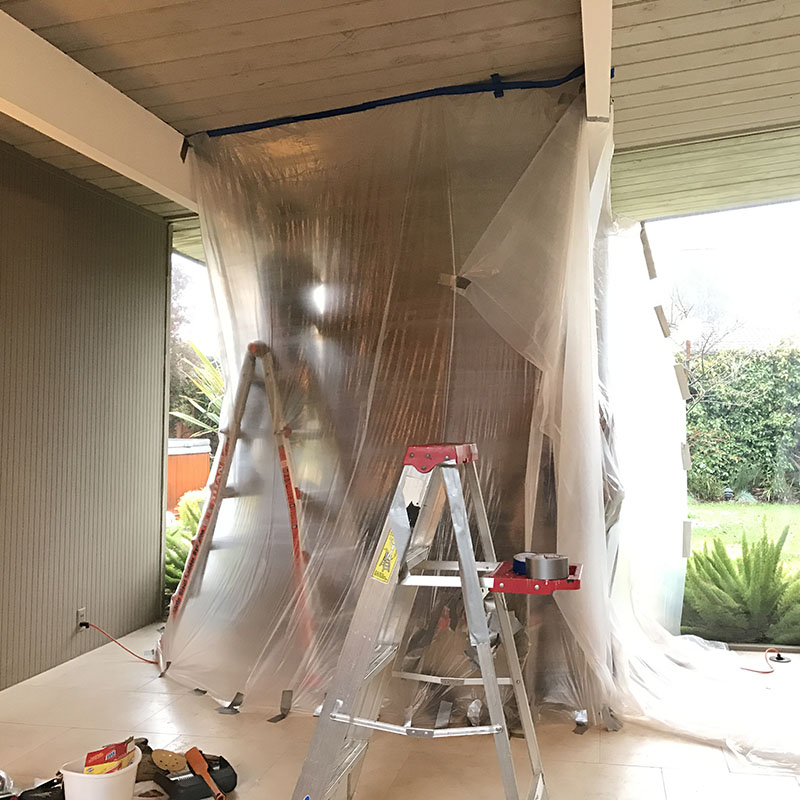 “When this was finished, we were left with a dingy natural brick fireplace that still had some green paint in the nooks and crannies. We knew we had to keep going. But by now, there were many many hours invested into this job and we were getting tired of it. But we had come too far to stop.” 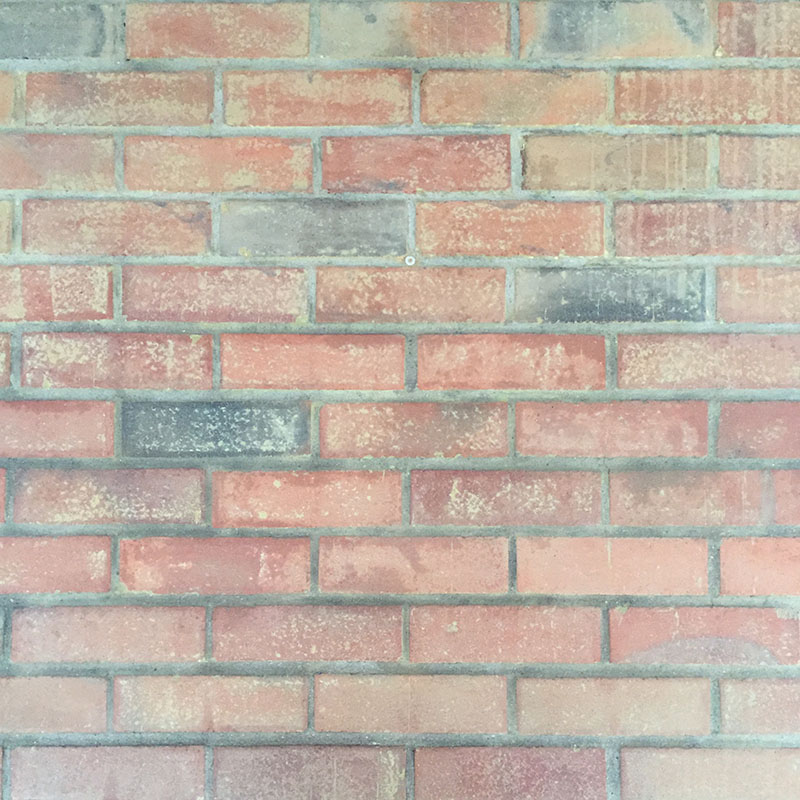 “We purchased more wire brushes and scraped and scrubbed. We tried every wire brush we could buy. We tried SOS pads. We tried steel wool. We tried plastic scrub brushes. In the end we used a combination of what worked. It took lots of hours and elbow grease but we are so happy with how it turned out.” 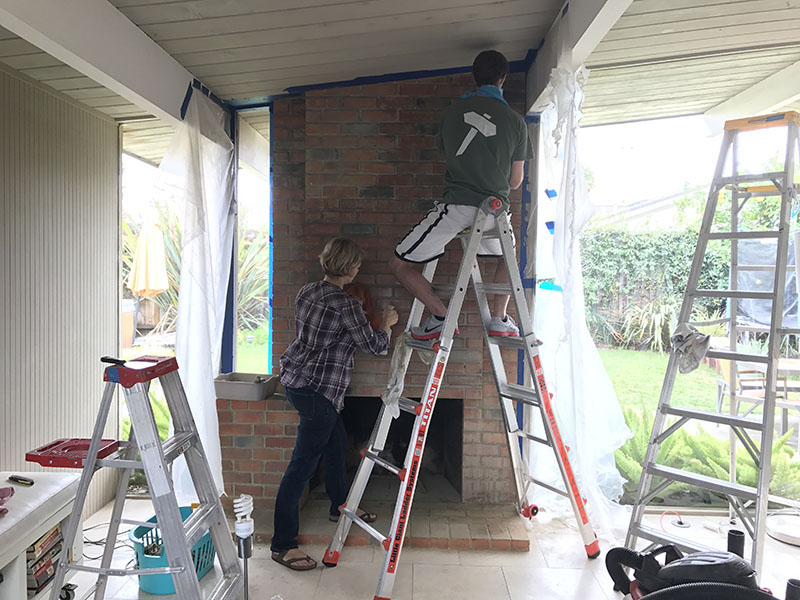 “The project took about a month, with work here and there, over at least 20 days. Some days were full days, other days we fit in an hour or two where we could. I am so lucky that I have a very strong 22-year-old son that did a lot of the work. He had the strength to scrub with wire brushes and apply pressure where I was too weak to be super effective.” 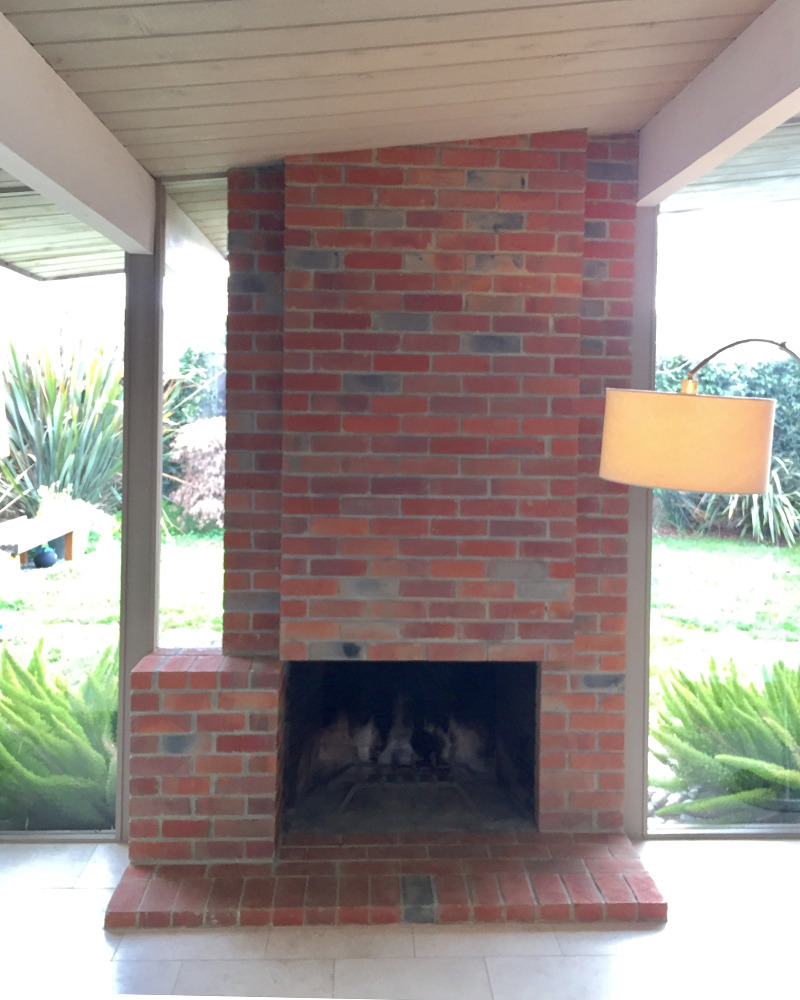 “So there you have it! Our process of removing paint from brick. I am so happy that we never painted the back because it just “feels right” natural. It feels like the room can breathe. Now that the paint removal process is done, there are a few spots where we will touch up the grout. And I think I want to paint the box black. I have to say that we could not be happier.” 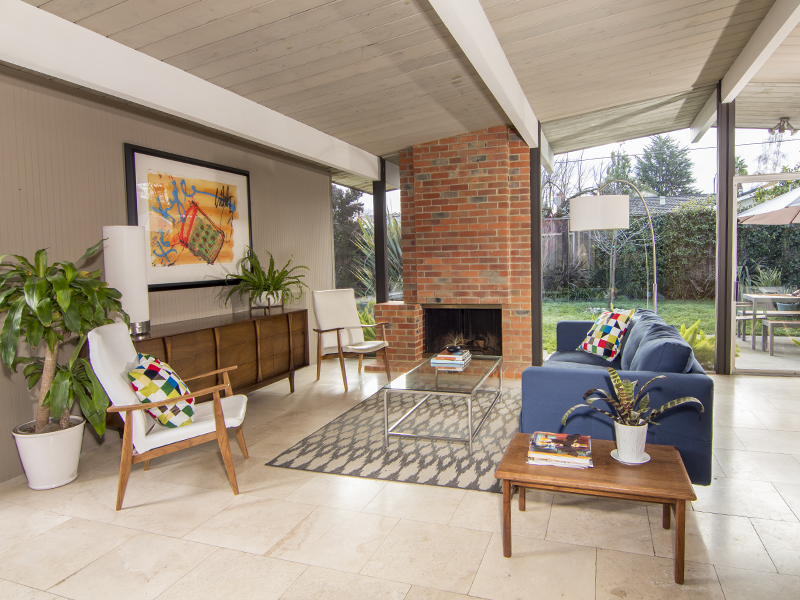 Hard to believe it was ever painted, right?! Such impressive work, and thanks so much for sharing, Ivy and Kyle! –you must both be thrilled (not to mention exhausted) by what you’ve achieved. We found this project so inspiring, and hope it motivates others to rescue their own Eichler fireplace. Kudos guys! 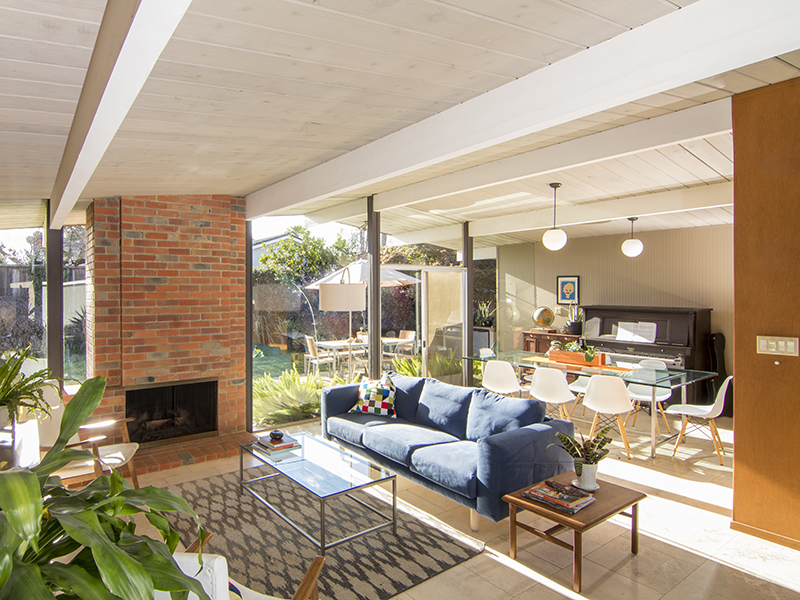 Talking of other people’s fireplaces, our good friends Karen and John also just restored theirs –’tis the season, I guess. Oh, and a special mention to Instagram friend @farman who got the ball rolling, with his own rescue mission. And if you’re wondering, cinder-block fireplaces (like ours) were painted from the start, so this is one dilemma we didn’t face…thankfully.